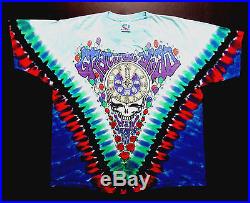 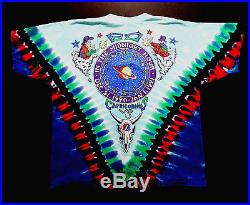 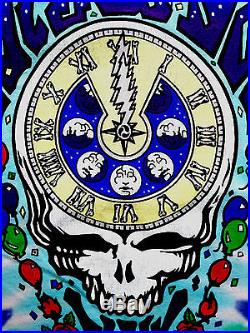 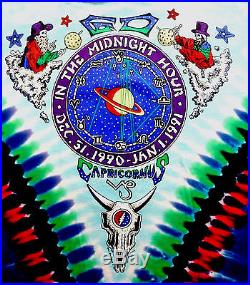 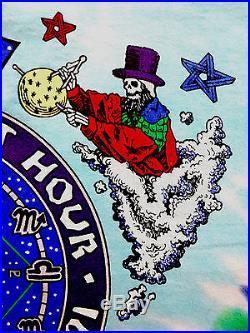 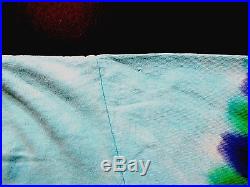 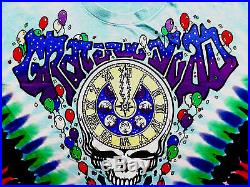 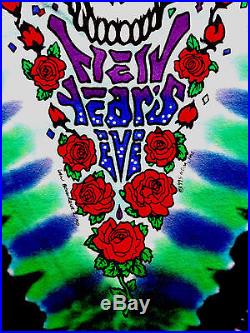 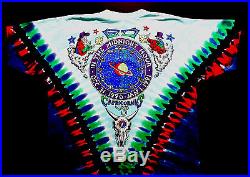 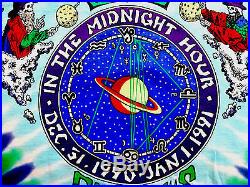 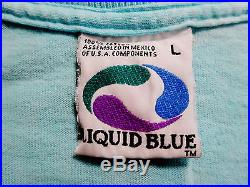 Grateful Dead Shirt : New Year’s Eve 1990 – 1991 Capricorn Zodiac Design!!! 1995 (1991/1995) Grateful Dead Merchandise, Inc. Issue : Tie Dye : Large (L) : Amazing! Zodiac ” New Years ” Tie Dye!!! Issued Tie Dye featuring Timepiece & Zodiac-Time… Capricornus commemorating the 1990 – 1991 Oakland Coliseum New Year’s Show!!!!! Bill Graham’s Last & Final Grateful Dead New Years Eve Grateful Dead Show!!! Offered here is the Amazing! 1995 Grateful Dead Merchandising Shirt – made specially to commemorate the Grateful Dead’s Huge!!! 1990-91 New Year’s Eve Show! … Which, of course was a National! Truly one of the coolest “dyes” ever made for a G. New Year’s Show… And really, one of the very-best across the board!! And, it’s so cool to see that GDM recognized the popularity of this one, as in 1995 – they made this Tie-Dyed Beauty! Switching-up, changing & adjusting the Tie-Dye Colors to what at least my eye… Borders on Dead Head T-Shirt Perfection!!! This one is way-way cool – and hey, if you are one that resembles Capricorn… Or should I say “Capricornus”! — then this one is an absolute must-have. Keep in mind too, as this was the 2nd to last New Year’s Eve Grateful Dead Show ever played, and on a sad-note, this show was indeed the last N. Show that Bill Graham saw… With that beyond untimely loss occurring in’91. From what I can tell, Bill Graham and his spirit pretty much was! New Year’s Eve to the Grateful Dead, as they would play one more N. Show following in 1991 – and then that would be it… Forever, the very last one. Well, these are probably the main reasons that the 1991-92 New Year’s Run even happened. As the Dead were certainly not the type to back out, but – because of the unfortunate timeliness of the situation, that Show & run did go on. But talk about a bitter-sweet run. While on the other hand, this 1990-91 was the last of the “Real Deal” really… Because it included Bill, through & through. And on a much lighter & brighter note – something that is quite cool… Pretty much every (or almost every) Dead Fan in the entire nation sort of felt like they attended this one, because it was a National “Live” Radio Broadcast!!! You know, kind of like the’87-’88 Show being Televised, or say the’89 Summer Solstice Show being a Nationwide Pay-per-view Broadcast! It really extended to the masses, because it was just all over the radio! Talk about welcomed-reach, to the deadhead Faithful, right? If you didn’t go to this Show, you definitely remember where you were when you listened to it, and probably who you were with — your fellow Dead Fan friends, right?? Seriously quality memory for most all. So in a lot of ways, if this magnificent tie-dye wasn’t cool enough already – then that definitely! Because most all fans know the setlist to this hot night. At least to me ears, that was a nice standout. And as for the design itself? … Speaks for itself – Timepieces, Zodiac Time! … And the inclusion of the “Capricornus” design… Including Grateful Skulls, Steal Your Faces, Red Roses, and the Works!! Of, and of course… One of the ultimate G. New Year’s staples — Balloons! Ooops – better keep those staples away from those balloons though – Ha! More like watch Jerry just kidding… I mean Bobby Ace kick one off the stage!! Oh, as those were the days… And to me, this Beautiful Shirt seriously Speaks-it!! Hey, let’s face it Fans… On some Tie Dye Tees — they are just made right! And this’95 GDM Masterpiece of a Dye! Definitely has all the right stuff! Red, White & Blue Balloons! … Falling all-over the Stage! Our Love Will Not Fade Away!!!!! > > > Tag Size / Brand : Large (L) / Liquid Blue (100% Cotton) Pit-to-Pit = 23″ Length = 27″ As this is a lightly used, and well taken care of shirt – here are the only issues that stand out to my eye upon very close inspection : >>> one (1) tiny/small hole (approximately 1mm), located on the front right shoulder please see photos (close-up photo #6). >>> some cracking of the shirt designs (please see photo). Please see all photos provided… The item “Grateful Dead Shirt T Shirt 1990 1991 New Years Eve Zodiac Tie Dye GDM 1995 L” is in sale since Thursday, July 27, 2017. This item is in the category “Entertainment Memorabilia\Music Memorabilia\Rock & Pop\Artists G\Grateful Dead\Apparel”. The seller is “springfromnight1989″ and is located in Portland, Oregon. This item can be shipped worldwide.